skip to main | skip to sidebar

An Interdisciplinary and International Conference

We are inviting papers and/ or panel proposals for a 3 day conference on re-visions and re-presentations of Terrorism, to coincide, roughly, with the 10th anniversary of the terrorist attack directed at the World Trade Center in New York on September, 2001.

To paraphrase Supreme Count Justice Potter Stewart’s comments concerning pornography in his opinion in Jacobellis v. Ohio (1964), “We can’t define what terrorism is, but we know it when we see it.” We all know what terrorism is given the clear images we have in our mind’s eye of the airplanes crashing into New York’s Twin Towers. And we all know what terrorists look like. Or at least we think we do. For the past decade we have seen the pictures of Osama Bin Laden and his Al Qaeda followers on countless TV shows, newspapers, and magazines. Those are the visions we have. It has not always been thus. The fortunes of terrorism have waxed and waned over the centuries. While established governments have always railed against “terrorists,” frequently at least significant portions of local populations have sympathized with them. With the attack on the Twin Towers on what has come to be known as 9/11, suddenly terrorism came to be considered the manifestation of evil incarnate. It was no longer a subject which could be studied objectively and dispassionately. Its destruction, whatever it was and is, became, as President Bush called it, a “crusade” and as such warranted the expenditure of limitless resources and the sacrifice of hundreds of thousands of lives, most of which were unquestionably innocent. After a decade of war against an enemy we are no closer to being able to identify today than we were in 2001 and having achieved none of our stated objectives, with the exception of the removal of Saddam Hussein and the Bath party in Iraq, it is perhaps finally time to “re-vision” terrorism, that is, to look at it once again, to see how it has been perceived and depicted over the centuries in literature, art, theater, and most recently, in the audio-visual media.


While we do not expect to find a unitary definition of and/or explanation for terrorism, what we do hope to accomplish by asking the most diverse questions, questions that can best be addressed by scholars in the most disparate fields of research, is to begin a discussion which will encourage a more flexible response to one of the most serious problems confronting the United States and the world today.

The conference organizers invite papers that, from different disciplines and perspectives, address how terrorism has been perceived and depicted in literature, art, theater and, most recently, in the audio-visual media from antiquity to the present by asking, among others, the following questions:

Can terrorism be defined as only the actions of a relatively small group of irrational malcontents against the state?

Can terrorism describe the deliberate actions taken by a state against individuals and minorities?

Can actions taken against an enemy foreign state be considered terrorism?

Can one legitimately say that one person’s terrorist really is another’s freedom fighter?

What are the objectives of terrorism?

Who and what are the targets of terrorism?

Does terrorism have to have a political objective?

Can a profit-driven criminal activity be considered terrorism?

Are terrorists cowards or heroes?

Can terrorism best be confronted and suppressed by waging war or by police actions?

Can cyber-terrorism be considered actual terrorism?

How have societies dealt with terrorism over time?

How are terrorist events represented in art, literature, theater, and cinema?

What is the relationship between terrorism and the popular media?

What should the role of the intellectual be vis a vis terrorism?

How does this perception coincide or differ from that of peoples of other nations and other regions of the world?

Is it possible to openly question American anti-terrorism and counter-terrorism post 9/11?

What has the impact of 9/11 been on American laws and civil liberties?

The international symposium and its year-long focus on representations of terrorism in literature, art, theater, and film and television, will demonstrate that arts and humanities faculty do indeed engage in this highly relevant issue, and that our approaches contribute meaningfully to recovering elements of our quality of life that have been jettisoned in the post-9/11 era. The published volume which will follow will serve as an example to researchers in the US and abroad who will continue to speak out on this issue, which is often framed in terms of security, but seldom in terms of humanistic values. 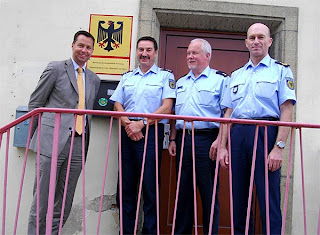